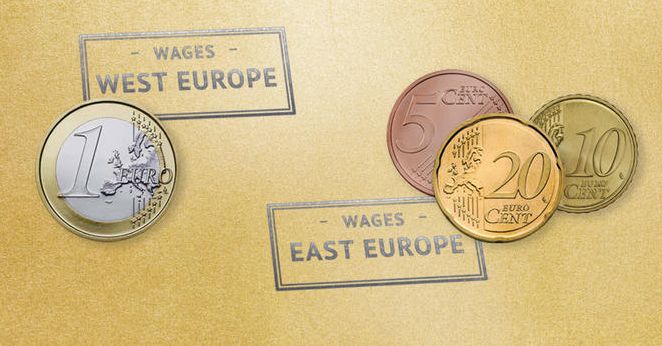 Romania is losing on wage convergence compared to the EU average, but also in relation to Central and Eastern Europe countries

The govenrment invokes the pandemic and the global crisis as a prime justification for freezing the wages, the pensions and all the other expenses for the most vulnerable segments of the populations. Undeniably, the crisis manifests itself in the entire world, but not everywhere it is used as an excuse for cutting down on vital resources and hit the most disadvantaged categories of the population.

The analysis regarding this year’s evolution of the minimum wages in the European countries shows that a great majority of the states which have a statutory minimum wage have increased it from the beginning of the year. Table 1 presents the minimum wage increases in the Central and Eastern European Member States which, just like Romania, are going through a process of gradually closing down the wage gap with the Western Europe

Minimum wages have increased also in Western European countries, such as France, Germany, The Netherlands, Ireland, Switzerland, Luxembourg, Portugal, Malta or Great Britain. Despite the percentage increase being significantly lower than in the Eastern European countries, the overall net increase is in fact higher than in Romania. An increase in the minimum wage of just 10-15 cents per hour leads to a monthly increase of 16-25 EUR.

What conclusions can we draw by looking at this data?

Taking into consideration all the above-mentioned aspects, and also the fact that last year, Romania had an increase in the minimum wage lower than in any other European country (as we have shown HERE), we conclude that the wage convergence with the rest of Europe no longer exists. On the contrary, the wage gap widens up!

Additionally, keeping the sectoral collective bargaining blocked, through the effects of Law 62/2011, determines the entire wage pyramid to be pressed toward the bottom level. We have almost a third of the employees registered on the minimum wage (1.6 mil), and half of the employment contracts registered in REVISAL, have a net value of either lower or equal to 1600 RON.

What are the consequences? Maintaining and further widening the poverty of the population contributes to the massive migration and chronic underdevelopment.

Only an unconscious political class that follows only their personal or group interests can ignore such a situation!

NTUC Cartel ALFA continues the protest actions for the increase of workers' incomes, social justice and balanced public policies, in the interest of the citizens. Since January 14, when the Caravan of Social Rights left Baia Mare, our members have demonstrated in the cities of Zalău, Târgu Mureș, Brașov, Ploiești, Constanța, Piatra Neamț, Botoșani, Iași, Galați, Buzău, Sibiu, Craiova, Pitești , Târgoviște, Drobeta Turnu Severin, Arad, Timișoara, Târgu Jiu and in Bucharest at the headquarters of the main institutions and governing parties.

Even in times of pandemic or crisis,
We all have the same rights!

The calendar, motivations and demands of the protest actions:  LINK
or on the FB page of CNS Cartel ALFA: fb.com/cnscartelalfa

[1] Source of the data on the evolution of the minimum wages: https://wageindicator.org/salary/minimum-wage/minimum-wages-news. For the effective taxation rate of the minimum wages, we used the date from the Delloite report, available online: https://www2.deloitte.com/ro/ro/pages/about-deloitte/articles/analiza-deloitte-salariul-minim-in-romania-prin-comparatie-cu-al-statelor-din-regiunea-europei-centrale-si-de-est.html. For Slovenia, where the taxation system includes many variables, the average value is used, from the OECD report: http://www.oecd.org/tax/tax-policy/taxing-wages-slovenia.pdf