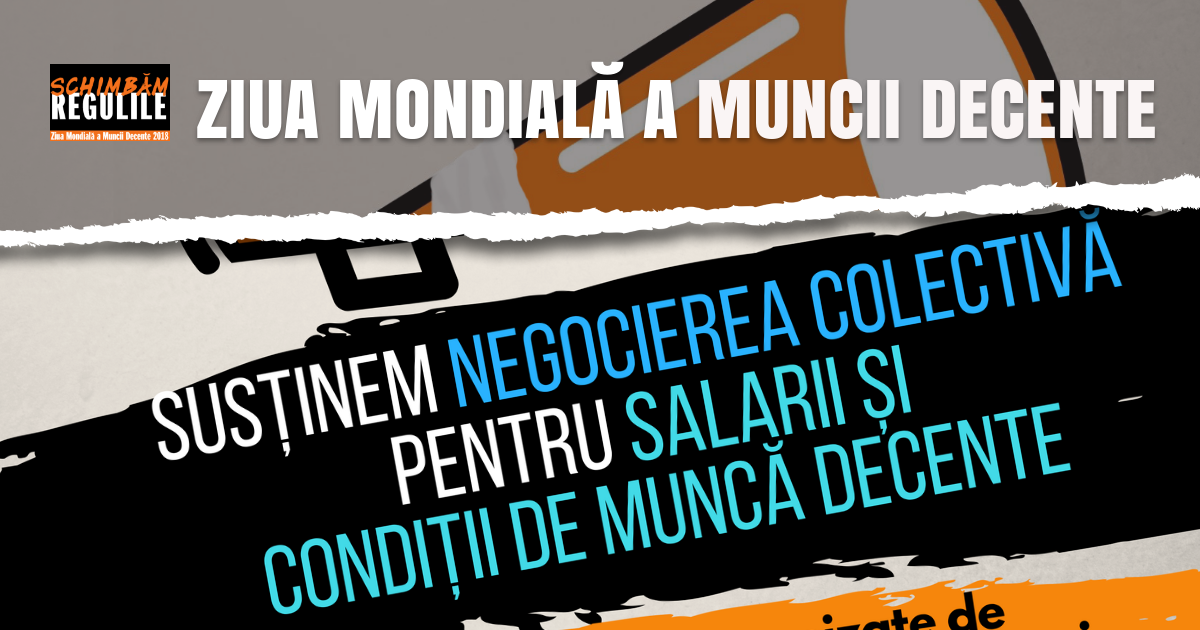 WHY SOCIAL DIALOGUE LAW NEEDS TO BE CHANGED?

In the seven years since the adoption of Social Dialogue Law no. 62/2011 (document), as part of austerity measures, the situation of Romanian workers has deteriorated.

During this period Romania had a steady growth rate above the European average, yet those who contributed most to this growth, the workers, benefited the less.

Collective bargaining, one of the main mechanisms for the fair redistribution of economic results, has been distroyed by the effects of this law. This can be seen in:

THE CONCENTRATION OF WAGES AT THE BOTTOM

More than one third of all full-time employees are on minimum wage.

Lack of real negotiations pushing salary increases up has expanded the number of people paid at the minimum level (EUR 250 net) with each increase in the minimum wage. In 2011, before the adoption of Law 62/2011, about 8% of the full time employees were paid the minimum wage. Meanwhile, their number has multiplied five times.

A large proportion of workers are not being able to secure decent living for their families, yet the conseqences are much broader:

THE FLATTENING OF PAYSCALES

In the public system, through specific legislation, salary hierarchies according to experience, level of qualification or responsibilities could still be maintained. In the economic sector, however, this can not be achieved without the instruments of collective bargaining to ensure a fair, if not proportional, increase in the other salaries as the minimum wage increases.

Thus, in the economic sector, over half of the individual employment contracts are on the minimum wage or lower. At the same time, 8 out of 10 Romanians have a net basic salary of less than 2050 lei (EUR 440).

Specifically, we are dealing with the levelling of wages for many employees with different qualifications and experience and holding positions with very different requirements. Naturally, this equalization produces dissatisfaction with the more skilled employees, further fueling the fluctuations of the workforce faced by businesses.

THE UNFAIR DISTRIBUTION OF ECONOMIC RESULTS BETWEEN CAPITAL AND LABOR

The share of employees' remuneration in GDP declined significantly after 2008 and has so far remained at a much lower level than the pre-crisis period.

The slight recovery in 2017, especially as a result of wage increases in the budgetary sector, does not significantly change this situation. No other Central and Eastern European country has seen such a strong downward trend in the share of employee remuneration in GDP over the last decade.

This is a relevant indicator to understand to what extent employees benefit from the economic growth they directly contribute to and shows the deeply unfair distribution of the outcomes of economic growth between workers and the representatives of the capital, the shareholders.

Companies keep a higher proportion of revenue, as profits, to the detriment of wages, and it is necessary to renew collective bargaining to achieve fairer wages.

There are also other indicators that show the deterioration of the situation of Romanian workers: the level of in-work poverty is highest in Romania, as one fifth of Romanians having a job are at risk of poverty, double the European average, social inequalities are also very high while the rate of profitability per worked hour has increased.

The recommendations of the European Commission, the Council of Europe, the International Labour Organization are for amending Social Dialogue Law no. 62/2011 to remove obstacles to the functioning of collective bargaining:

Country Specific Recommendation/Council Recommendation: „Romania’s collective bargaining framework is not conducive to a wellfunctioning system of industrial relations. Social dialogue is characterised by a low level of collective bargaining, especially at sectoral level and low membership of trade unions and employers’ organisations. High representativeness thresholds and the vague definition of sectors are among the key obstacles to more effective social dialogue. Legislative amendments to improve the framework have progressed little so far.”

Major obstacles for collective bargaining in the current legislation and

Main proposals for amending the law, in line with the guidelines provided by the International Labour Office

Social Dialogue Law limits the excercise of the right of association as a trade union can only be set up by at least 15 employees, who must work with the same employer.

Given that Romania's economy relies predominantly on small and medium-sized enterprises - 92.5% of the Romanian active enterprises have less than 15 employees – for about a quarter of the employees the law prohibits the exercise of the fundamental right of association guaranteed by the Romanian Constitution and the international treaties and conventions ratified.

Moreover, since only employees with employment contracts have the right to be trade union members, the law prohibits this right to other categories of workers, such as the day-labourers (working in 14 sectors of activity), the self-employed or those employed in new types of work relationships in the digital economy. There are about 1,5 million independent workers, and almost half are out of the social security system, being the least protected social category and most at risk of poverty.

Thus, the provisions of Law 62/2011 prevent a large number of workers from setting up or joining a trade union in order to promote their collective rights.

Thus, the differentiated salary scales which set higher levels of minimum wage for higher levels of qualification, compulsory vocational training, employers' obligation to establish the workloads in agreement with the trade union, and so on, were suddenly lost.

Unrealistic conditions for the conclusion of collective agreements at sectoral level

In order to have a collective agreement at sector level, the trade union organizations participating at the negotiating table must represent at least 50 per cent of the employees in the whole sector. At the same time, employers' organizations participating in the negotiation must have 50% +1 of the employees in the entire sector.

Thus, the conditions imposed by the law for the conclusion of collective agreements at sector/branch level are exaggerated and unrealistic.

Practically, at this level, collective labour agreements have completely disappeared from both the private and public sectors, the number shrinking sharply from 47 agreements concluded between 2005 and 2010 (an annual average of 8 agreements) at 0 (zero) between 2011 and 2018.

Obstacles for unions in representing the interests of their members

In order to negotiate the collective labour agreement at the company level, and, if an agreement is not reached, to be able to trigger the labour conflict, a trade union must have as members over 50% +1 of the employees in the company (including part-time or fixed-time workers). The threshold is difficult to achieve, and a small number is enough to withdraw (at direct or indirect pressure) to prevent the union from achieving the threashold or to lose it.

Thus, the law favors employees’ representatives against trade unions. In the absence of a clear and validated procedure for their election - unlike trade unions who have to take a difficult route to obtain legal personality – employees' representatives are often close to management and sign collective labour agreements without a real negotiation. What is worrying is that these agreements generally take over provisions from the law or provide hypothetical rights (for example, with phases like: "Employees can benefit from ..."  and not including the conditions under which the alleged benefit is materialized).

9 out of 10 collective labour agreements concluded in recent years in the economic sector have been signed by employees' representatives, lacking substance in terms of benefits for workers. Instead, their main function is to ensure the so-called social peace for the employer, to make it look good in front of business partners or investors and to prevent real bargaining with employees.

In the context of the World Day for Decent Work, the NTUC Cartel ALFA is lauching the campaign "Change the rules" which aims to increase the awareness of the working conditions in Romania and to support the initiative to change the social dialogue law, as drafted by the Coalition for Decent Work, with the support of the trade union confederations, with the aim of removing the obstacles blocking collective bargaining in Romania.

On Friday, 5 October, members of the confederation will wear white armbands to support collective bargaining for wages and better conditions and to convey the message:

WORKERS HAVE THE RIGHT TO A DECENT LIFE FROM WORK!

We call on decision-makers to tell them that the rules need to be changed so that workers' fundamental rights are respected, a necessary and minimal condition for decent work to become a reality for Romanians working in their own country. 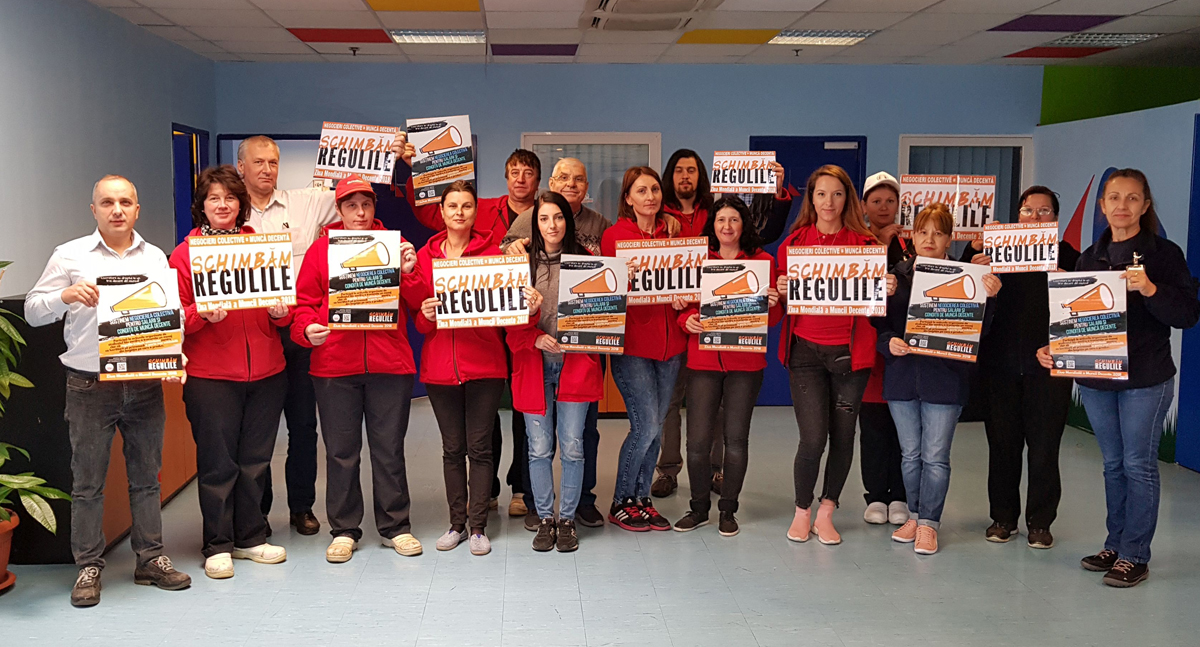 More images in the Picture Gallery