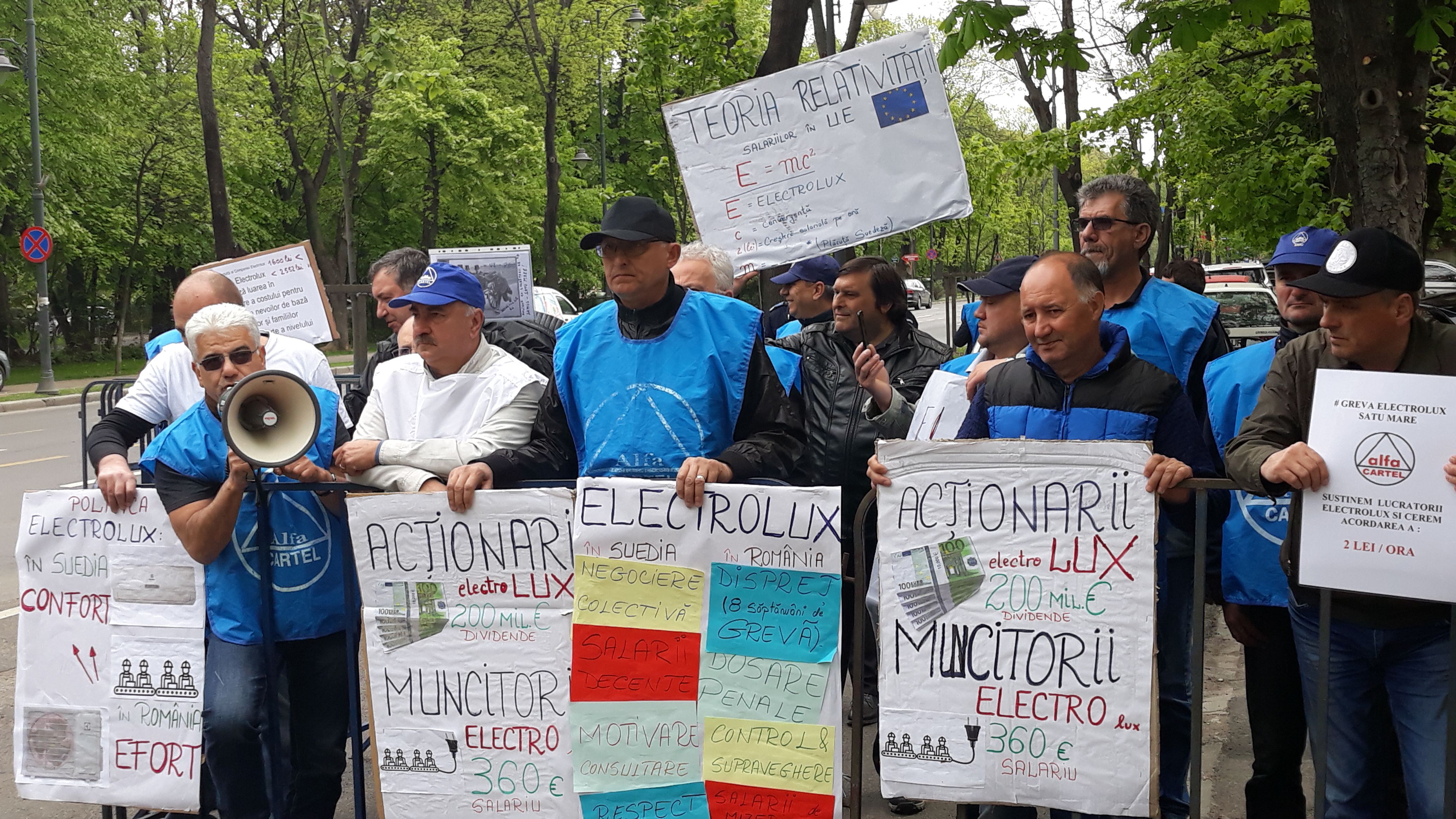 Through the voice of the employees remaining in the factory, Electrolux Company threatens to relocate production to Poland. We believe it is an action to intimidate the strikers, which is aimed at discouraging workers in Satu Mare and elsewhere, to claim their rights. This is mainly due to ineffective Romanian labour law and also to Romanian institutions that allow multinational employers to act against workers in the event of a strike.

We understand that in the current market economy capital is free to move and it moves where the conditions are more advantageous. But to make this move towards places where the productivity is not higher than in Romania, considering that salaries in Poland are also significantly higher than in Romania, without tax transfers (the employer also pays higher contributions on top of gross salaries than here), it is clear that it is an action not motivated by economic considerations but by the desire to discourage by any means workers to demand better wages.

The Electrolux Company (we are referring to the company, because the 100 anonymous employees in the factory, signatories of an open letter to strikers, speak on its behalf) is upset by the boycott action carried out by NTUC Cartel ALFA through the caravan from Satu Mare to the Embassy of Sweden in Bucharest. However, the boycott was the only way to legally determine the company to resume social dialogue and negotiation with the strikers. We remind the public, the company's representatives and the signatory employees of the letter that, prior to the announcement of the boycott action, the company's management had completely blocked the dialogue with the union for six (!!!) weeks, during which the strikers presented themselves every day at the factory and have shown their willingness to negotiate.

CNS Cartel ALFA does not encourage the unjustified prolongation of this labour conflict! We have always been open to dialogue, including numerous attempts to establish a dialogue with the Swedish group management. Ending the labour conflict lies exclusively in the power of the factory’s management by sitting at the negotiation table in the effort to find a solution acceptable to both parties.

The company claims to offer „competitive” salaries (it is true that they are not the lowest salaries in the area or in the industry). On the other hand, workers draw the line at the end of the month and find that the money does not cover the living costs. They also note that the number of products they are making increases steadily due to a faster pace of work, shorter breaks and an increasing pressure on employees. The two sides have to sit at the negotiating table and find the best compromise solution to complete the negotiation of the collective labour agreement at the company level.

In the Romanian economic sector, salaries remained at a very low level due to the blocking of collective bargaining through the legislation adopted in 2011, at the pressure of multinationals. In the absence of mechanisms for wage growth through collective bargaining at sector or national levels, wages increased slower than productivity, and the net average wage in the economic sector is about 1,000 lei (220 euro) lower than the average public sector net wage. This fuels the massive migration of the workforce, and will also lead to extremely low income during retirement.

We express our hope that the company's representatives will eventually replace the pressure with dialogue and that they will sit in good faith at the negotiating table. NTUC Cartel ALFA stands with the Samus Trade Union, and the entire trade union movement in the country and abroad supports their fight for fair pay.